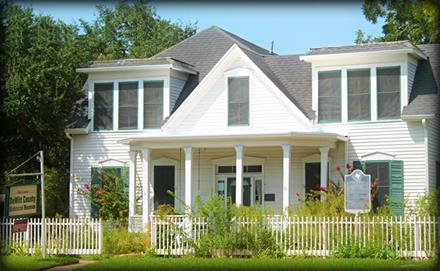 The Bates-Sheppard Home, which houses the DeWitt County Historical Museum, is listed on the National Register of Historic Places and is a recorded Texas Historical Landmark. The house was erected by the late F. W Bates in October-November, 1886.

In August, 1886, the Indianola family home of Mr. Bates's wife, Elizabeth Sheppard, was destroyed by the great hurricane of that year. Several of the Sheppard family members perished in the storm that devastated Old Indianola, a Gulf Coast port that rivaled Galveston in its time. Mr. Bates and young Joseph and Henry Sheppard, who were left homeless by the storm, returned to Indianola, collected the lumber from the remains of the Sheppard home, and incorporated it into the residence that was built on lots Mr. Bates had purchased in June of that same year. The former residence is a "house" museum.

In addition to the Bates home, a two-room log cabin, complete with dog run, is also located on the grounds. The home and log cabin have fascinating histories that incorporate the area's ties to Old Indianola with the settlement of DeWitt County. Visitors can stroll through the beautiful, old-fashioned garden and walk back in time to explore the historical experiences of DeWitt County life.
Webpage Courtesy of the City of Cuero

Fix It Form
Tell us what needs to be fixed